“It takes time for a brand to establish itself, but we are clearly seeing that this is now occurring with Rainbow Rangers across multiple-platforms, including the recent release of season one on Netflix, where the series cracked the Top 10 of children’s programs for the first time, and is consistently a top performer in Netflix categories such as 'Girls Take the Lead,' 'Everyone’s Watching,' and 'Exciting TV Shows.' At the same time, we are witnessing adoption across a growing base of broadcasters, including the launch of Rainbow Rangers on Paramount Plus network on August 18th,” stated Jon Ollwerther, President of Kartoon Channel! & EVP of Business Development at Genius Brands.

The broadcast success corresponds with the development of a new 2022 retail program with master toy partner, Never Wrong Toys. The retail program is based on a broad range of preschool products, initially focused in the toy category. The launch is planned to coincide with the world premiere of season three of Rainbow Rangers, exclusively on Kartoon Channel!

“The recent success of Rainbow Rangers reminds me of the early trajectory of Strawberry Shortcake, which started with Hasbro Toys, but moved to Bandai Toys, and Playmates, where it eventually drove a highly successful, multi-billion dollar global licensing program,” noted Genius Brands’ Chairman & CEO Andy Heyward. “We are taking a page from the Strawberry Shortcake playbook, with Emmy Award-winning producer Mike Maliani of that property leading the production of Rainbow Rangers in season three, introducing a twist in the new season—the addition of a scent in the storyline! Not unlike Strawberry Shortcake where all the dolls and products were scented strawberry, the dolls and products coming forth from Rainbow Rangers will be scented as well. We believe this will be a huge driver in the girls’ product category.”

Kerry Phelan, Executive Vice President & General Manager of Global Franchise Management at Genius Brands stated: “Rainbow Rangers is a special series that is clearly resonating with young audiences around the world as we continue to build our viewership with new partners, such as Netflix, coming on board. To crack the Top 10 for the first time so quickly on Netflix, coupled with the traction we’re gaining on Amazon and our own platform, Kartoon Channel!, is a testament to the strong appeal of the themes and positive messaging of the show. Our strategy continues to center around growth in viewership, which, in turn, is designed to feed our long-term merchandising strategy. We are enthusiastic about our partnership with Never Wrong Toys and are excited about developing an exciting range of preschool toys that tap into the most appealing elements of the show for 2022.”

Rainbow Rangers is a rescue-based series that follows the adventures of seven girls who are Earth’s first responders—protecting people, animals, resources, and the natural beauty of our world. Hilary Cherniss and Sara Jane Sluke, who were key writers in the first two seasons, are the Head Writers of season three. Multiple Emmy Award-winning director Michael Maliani directs the series, and Genius Brands' Chairman & CEO and multiple Emmy Award-winning producer, Andy Heyward, serves as executive producer.

A photo accompanying this announcement is available at https://www.globenewswire.com/NewsRoom/AttachmentNg/b59daedb-10a3-487a-a85d-744d3cd70edf 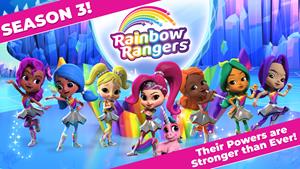