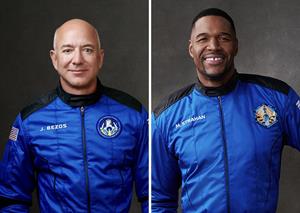 As we stand on the eve of a new era of space travel, Blue Origin Space Rangers will feature junior astronauts and adult leaders, who will live, create, and experiment together as they explore the infinite possibilities of life in space. With the mission to spark curiosity and encourage creativity among kids and families, the series will take audiences on a journey to explore the universe, science, new worlds, and perhaps new beings. Students will develop their skills in science, technology, engineering, arts, and mathematics to tackle the challenges and opportunities of space for the benefit of Earth. Constance Schwartz-Morini of SMAC Productions and Andy Heyward of Genius Brands will serve as executive producers of the series. Michael Hirsh, who produced the original STAR WARS animation of Ewoks and Droids, will produce alongside Michael Hefferon for Mainframe Studios.

“Blue Origin Space Rangers will be groundbreaking for Genius Brands in its creative scope, and for me personally, it is a dream come true given my lifelong passion for astronomy,” said Andy Heyward, CEO, Genius Brands International. “Partnering with Blue Origin and SMAC Productions will create multiple touchpoints for kids and families to explore, learn, and deliver a one-of-a-kind space experience. We look forward to not just world-class storytelling but inviting the voice talent of guest stars from the world of music, sports, influencers, and celebrity, young and old.”

“One year ago, I watched my friend and business partner Michael Strahan become an astronaut. This extraordinary experience was the motivation for us to create Blue Origin Space Rangers, a series that would inspire future astronauts,” said Constance Schwartz Morini, co-founder and CEO, SMAC Entertainment. “For our first project in the animated space, we couldn’t imagine two better partners than Blue Origin and Genius Brands to develop and bring this series to a distributor.”

“We’re excited to collaborate with Genius Brands and SMAC Productions to deliver an adventure-driven, STEAM-based animated series that will inspire people to consider the potential of using our solar system - for the benefit of Earth,” said Michael Edmonds, SVP, Strategy, Marketing, and Sales, Blue Origin, and President, Club for the Future.

About Blue Origin
Blue Origin was founded with a vision of millions of people living and working in space for the benefit of Earth. Blue Origin envisions a time when people can tap into the limitless resources of space and enable the movement of damaging industries into space to preserve Earth, humanity’s blue origin. Blue Origin is working today to create that future by developing reusable launch vehicles and in-space systems that are safe, low cost, and serve the needs of all civil, commercial, and defense customers. Blue Origin’s efforts include flying astronauts to space on New Shepard, producing reusable liquid rocket engines, developing an orbital launch vehicle with New Glenn, building next-generation space habitats, and returning to the surface of the Moon. These endeavors will add new chapters to the history of spaceflight and move all of humanity closer to that founding vision. For more information about Blue Origin, please visit BlueOrigin.com.

Genius Brands’ Forward Looking Statements: Certain statements in this press release constitute "forward-looking statements" within the meaning of the federal securities laws. Words such as "may," "might," "will," "should," "believe," "expect," "anticipate," "estimate," "continue," "predict," "forecast," "project," "plan," "intend" or similar expressions, or statements regarding intent, belief, or current expectations, are forward-looking statements. While the Company believes these forward-looking statements are reasonable, undue reliance should not be placed on any such forward-looking statements, which are based on information available to us on the date of this release. These forward looking statements are based upon current estimates and assumptions and are subject to various risks and uncertainties, including without limitation, our ability to generate revenue or achieve profitability; our ability to obtain additional financing on acceptable terms, if at all; the potential issuance of a significant number of shares, which will dilute our equity holders; fluctuations in the results of our operations from period to period; general economic and financial conditions; our ability to anticipate changes in popular culture, media and movies, fashion and technology; competitive pressure from other distributors of content and within the retail market; our reliance on and relationships with third-party production and animation studios; our ability to market and advertise our products; our reliance on third-parties to promote our products; our ability to keep pace with technological advances; our ability to protect our intellectual property and those other risk factors set forth in the “Risk Factors” section of the Company’s most recent Annual Report on Form 10-K and in the Company's subsequent filings with the Securities and Exchange Commission (the "SEC"). Thus, actual results could be materially different. The Company expressly disclaims any obligation to update or alter statements whether as a result of new information, future events or otherwise, except as required by law.

Photos accompanying this announcement are available at: