Genius Brands and Alibaba’s Youku will co-produce 52 x 11 episodes of the comedy, action-adventure series, which will be available to Chinese audiences on Youku. Genius Brands is also currently in active discussions with potential U.S. partners and is debuting Stan Lee’s Superhero Kindergarten to international buyers at this year’s MIPJunior, a leading global kids entertainment industry event in Cannes, France.

Created by Stan Lee as one of his final projects, Stan Lee’s Superhero Kindergarten, which targets kids ages 4 – 7, is also co-produced by Lee’s POW! Entertainment, and Schwarzenegger’s Oak Productions. Schwarzenegger, who also serves as executive producer, lends his voice as the lead character in the series. Co-creator of Deadpool, Fabian Nicieza, who has sold over 100 million comics worldwide, is scripting the series.  Genius Brands’ Chairman and CEO and multiple Emmy Award-winning producer of more than 5,000 episodes of children's programming Andy Heyward, Paul Wachter, CEO of Main Street Advisors, and President of POW! Entertainment Gill Champion also serve as executive producers.

“Youku is one of the most innovative media platforms in the world with an unparalleled ability to integrate entertainment and commerce,” commented Andy Heyward, Chairman & CEO of Genius Brands. “We look forward to collaborating with Youku to create a high-quality program in the preschool space that will resonate with a global audience.”

“With Stan Lee’s creativity, Arnold Schwarzenegger’s star power, and Genius Brands’ expertise in children’s entertainment, Superhero Kindergarten has all the elements to become a worldwide phenomenon. With Youku’s platform and technology, we are excited to help the program reach hundreds of millions of families in China and partner with Genius Brands to create this inspiring story for children around the world,” stated Aaron Liao, General Manager of Youku Kids.

About Superhero Kindergarten
Five years ago, a tremendous superhero battle blanketed the small town of Greenvale in cosmic radiation. Shortly thereafter, a previously ordinary diverse group of boys and girls, are showing the most unusual superpowers! Their superpowers, however, rather than coming from Kryptonite, or a radioactive spider, come from items in their kindergarten classroom….white glue, wooden blocks, crayons, silly putty, etc.

A very special kindergarten teacher arrives in Greenvale to train these super-kids. Arnold Armstrong (Arnold Schwarzenegger) knows what it is like to control superpowers, because he used to be Captain Courage, the hero whose final battle resulted in the creation of the super-kids! Arnold will teach the kids how to become the heroes of tomorrow, once he teaches them how to tie their shoes! This is a series of action, comedy, and fun, based on the genius and imagination of the great creative icon, Stan Lee.

About Stan Lee’s POW! Entertainment
POW! Entertainment Inc. is a multimedia company founded in 2001 by the iconic comic book creator Stan Lee with his friend and business partner Gill Champion, who is the President today, to create and license intellectual properties for entertainment media, including: feature-length films, television, merchandising, branded content and other related ancillary markets as well as exclusively maintain and protect the ownership of his name, likeness, voice, trademarks and publicity rights throughout the world. POW! Entertainment was acquired by Hong Kong-based Camsing International Holding Limited, one of China's leading brand licensing, entertainment, marketing, and promotion companies, in 2017. Under new leadership, another original founder and industry veterans from Marvel and MGM, POW! is working with top writers, artists, animators, filmmakers, and actors to extend the legacy of the greatest storyteller of our time.

A photo accompanying this announcement is available at https://www.globenewswire.com/NewsRoom/AttachmentNg/7a17e28e-f87e-4972-8b40-be5a7a2fc015 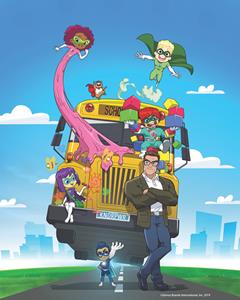