From fan to creator: Michael Uslan’s journey to Genius Brands (As seen in KIDSCREEN)

Michael Uslan, the producer and brand-builder behind every Batman movie since 1989, is turning his attention to Genius Brands’ new universe of superhero IPs, with the goal of creating stories that can resonate with global audiences.

Working as an advisor for Genius, Uslan will oversee and develop Stan Lee’s never-before-seen properties. He started working with the prodco last month, and will collaborate with his son David in the newly created role designed to let him steer all film and TV production on the projects. Genius Brands acquired Stan Lee’s likeness and the rights to more than 100 of his IPs (excluding Marvel properties) under the new Stan Lee Universe banner.

Uslan will work with closely the content and consumer products divisions, as well as leading external partnerships, to ensure all touchpoints of the brands are growing cohesively, he says. He’s particularly excited to connect with Archie Comicsthe first company to team up with Genius Brands on the Stan Lee Universe bannerto explore plans for brands in print. The first title to get a comic treatment will be Superhero Kindergarten.

Uslan is no stranger to the world of comic books (he even taught a couple classes at Indiana University about the importance of comics to American culture). But he’s perhaps best known for steering the Batman IP, which he acquired the rights to in 1979.

Despite the superhero love in today’s entertainment market, no one wanted the Batman Uslan pitched in the early ’80s He originally envisioned a darker and more realistic version of the character than the campy 1960s TV series (“Holy comedy, Batman!”), but was turned down by major studios in Hollywood that didn’t see any potential in bringing the character to film. And while the caped crusader eventually made it to the big screen, this consistent rejection forced Uslan to find an inner strength.

“The question I asked myself most during those times was, ‘Am I going to give up and listen to what others are telling me, or do I truly believe in myself and what I’m pitching?’” he says. “I always came up with the latter. That resiliency is something that has made me a better creator because it’s given me confidence and trust in my vision and my approach to IPs. I’m going to focus on slowly and carefully building strong stories and characters first, before making sure every aspect of the brand is working in tandem.”

Uslan has spent decades trying to prove that comic books are an art form full of powerful stories, and he finally managed to elevate the medium by making the first live-action Batman movie in 1989. Directed by Tim Burton and starring Michael Keaton and Jack Nicholson, the film shifted the industry’s view on comic characters as goofy tropes to content that could make money and win awards (his Batman won an Oscar in 1990), says Uslan.

While it’s far easier to get a superhero to screen in today’s world, Uslan says the struggle to get Batman there taught him some valuable lessons that are particularly relevant in 2020.

“To stand out in all the clutter, properties need either star power or good branding,” he says. “We’re seeing so much content coming out right now, and going forward I’m going to be looking at taking things slow in how we build our teams in order to not over-saturate the market. [We also need to make] sure we’re able to tap into the increased global demand for content by making a product that doesn’t just play to American boys who play video games.” 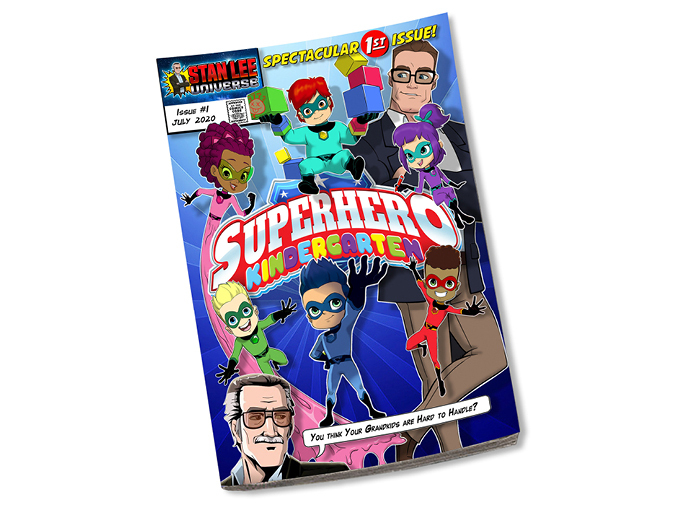 Uslan will use his Batman brand-building experience to steer consumer products for Stan Lee Universe banner, like upcoming comics.

Looking forward, he’s excited about the upcoming Batman movie with Robert Pattinson, which he’s executive producing, as well as some secret projects he has in the pipes.

“When people ask me what I do, I no longer say I’m a producer or a writer—although I still do all those things. I’m a builder of global branded franchises,” says Uslan. “I’m going to use my experience of growing comic-first brands to bring together Genius Brands’ TV folks, the publishing and mobile sides around creating IPs that are evergreen.”